ML misconceptions (8): neural networks may need to be retrained 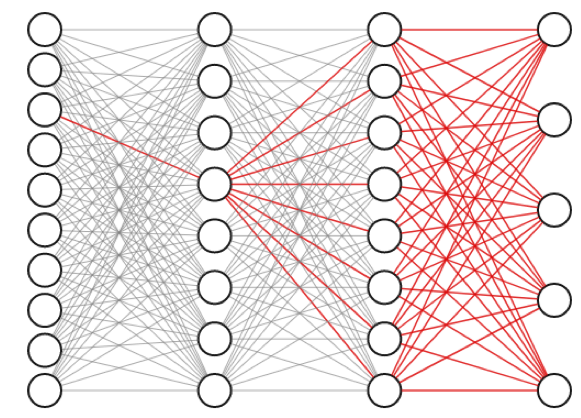 Given that you were able to train a neural network to work successfully in and out of sample still means this neural network may stop working over time. There are many reasons why this may happen.

This is not a poor reflection on neural networks but rather an accurate reflection of, e.g., the financial markets. Financial markets are complex adaptive systems meaning that they are constantly changing so what worked yesterday may not work tomorrow. Anything dependent on time will change!

This characteristic is called non-stationary or dynamic optimisation problems and neural networks are not particularly good at handling them.

It is clear that (for instance, in the network depicted above) the more complex, deeper, a network is the more dependent the result may be on the weights in the net: since the depth is thought to extract salient features, if the features are not longer present or change dramatically, the weights are inappropriate for the task at hand. The result is typically nonsense output. This is alleviated with periodic retraining, especially in dynamic environments.

Consider the image above, depicting a static environment. When the network has been training to perform well, it will continue to do so.

However, in the image below, this is no longer the case. We need to retrain the network if the optimum changes.

Dynamic environments, such as financial markets, are extremely difficult for neural networks to model.

Dynamic neural networks 'track' changes to the environment over time and adjust their architecture and weights accordingly. They are adaptive over time.