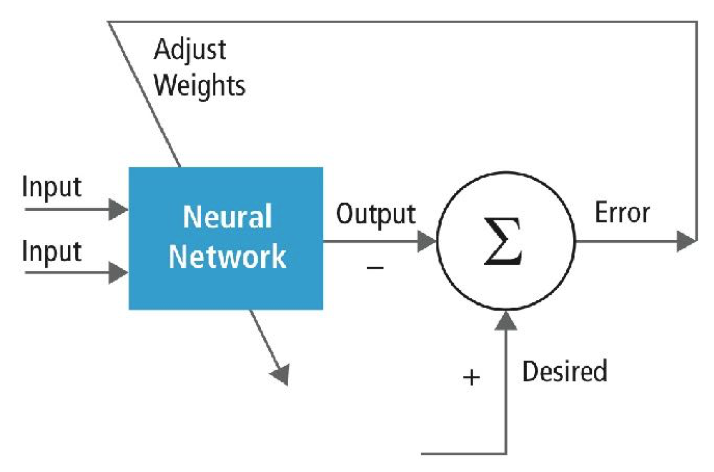 The learning algorithm of a neural network tries to optimise the neural network's weights until some stopping condition has been met. How do we do it?

In the image above, we have simply written “adjust weights”… but how is this really accomplished? The question is two-fold: when to stop? and how to actually adjust them?

The most common learning algorithm for neural networks is the backpropagation algorithm which uses stochastic gradient descent.

The are some problems with this approach.

Adjusting all the weights at once can result in a significant movement of the neural network in weight space, the gradient descent algorithm is quite slow, and is susceptible to local minima.

Local minima are a problem for specific types of neural networks including all where the connection weights are calculated using products. The first two problems can be addressed by using variants of gradient descent.

The following pictures and descriptions show different gradient algorithms, or rather, different families of algorithms.

Algorithms without scaling based on gradient information really struggle to break symmetry here - SGD gets nowhere and Nesterov Accelerated Gradient / Momentum exhibits oscillations until they build up velocity in the optimisation direction.

Algorithms that scale step size based on the gradient quickly break symmetry and begin descent.

Due to the large initial gradient, velocity based techniques shoot off and bounce around - Adagrad almost goes unstable for the same reason.

Behaviour around a saddle point.

NAG/Momentum again like to explore around, almost taking a different path.

That having been said, these algorithms cannot overcome local minima and are also less useful when trying to optimise both the architecture and weights of the neural network concurrently.

Here is how they can be used to train neural networks. In order to use, e.g., a genetic algorithm (GA), we have to represent the NN in a manner that is suitable for a GA. That is a vector representation.

This technique does not work well with deep neural networks because the vectors become too large.

I will deal with GAs at length in a future series of articles.

The GA may be used whenever necessary, when we feel that it would be advantageous for the overall algorithm.

The key takeaway from this article is that there are many ways of training a neural network, because after all the training is a process that adjusts the weights of the connections between the nodes in the layers, something that can be accomplished in a multitude of ways. Also recall that we actually may adjust the network as such as well (essentially either adding or removing nodes as required), in order to achieve an optimal result.